Users and Technologies Before the Web

From the 1950s until the early 1990s, computers ("electronic brains") were introduced and gradually propagated outside corporate machine rooms and offices. Personal computers (PCs) became available to experimenters in the 1970s, and to a more general population in the 1980s. At first, these systems enabled interested hobbyists and other individuals to perform local tasks and to play local games. Some office workers had timesharing terminals or PCs to perform tasks like spreadsheet analysis and word processing.

Personal computers started to become available in the 1970s, sometimes in the form of kits to be assembled by enthusiastic hobbyists. The preassembled Apple II was offered in 1977, followed by more refined, capable, and user-friendly successors like the IBM PC and Apple Macintosh in the 1980s.

During this era, most remote service access took place over telephone lines at limited speeds. At first, acoustic couplers clamped onto handsets, avoiding direct electrical connection to the Bell System network, but this approach only reached speeds up to 1200 baud (bits per second). Later dial-up modems connected to phone lines directly and achieved speeds in the 56,000 bit/second range.

In some offices, computers, file stores, and printers were linked together via local networks (LANs), commonly via proprietary methods like Novell's NetWare and Digital Equipment Corporation (DEC)'s DECnet rather than via emerging cross-vendor Internet standards.

Email was a primary application of early interest within and beyond the emerging Internet. It was the first computer-based method that enabled users to communicate across closed system boundaries, and became perhaps the first "killer" networking application. Email gateways converted messages, formats, and headers to satisfy the diverse requirements of different systems and networks. 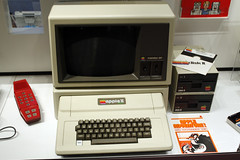 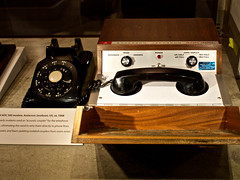